Inspiration: Bringing the OMNIA Nightclub to Life on the Vegas Strip 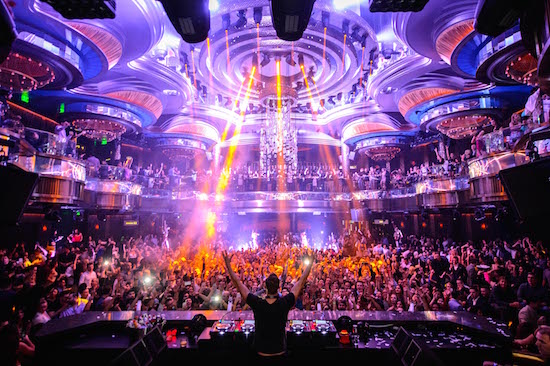 The dance floor is packed from wall to wall, the three-tiered, kinetic chandelier is tilting wildly, and A-List DJ Calvin Harris is blasting music; this is OMNIA’s opening night. The 75,000-square-foot OMNIA Nightclub, the newest attraction inside the Caesars Palace Las Vegas Hotel and Casino, is one of the hottest venues on the strip, drawing in celebrities from Miley Cyrus to Justin Bieber. And while club-goers are dazzled by the elaborate theatrics and decadent décor, the real star of this show is the intricate, technical design process that brought this dream-like space into reality.

One of the people responsible for OMNIA’s stunning visuals is Jim Rood from DMDS7UDIOS, a production design company that specializes in creative programming solutions for media servers, lighting, and complex entertainment venues like OMNIA, as well as concerts and stadium events. Rood and the team at DMDS7UDIOS created a 3D visualization of the club using Vectorworks Spotlight software and then optimized the design for programming within grandMA lighting consoles. And while Rood was used to working with large entertainment spaces, this innovative club still proved to be a distinct challenge.

“None of the people involved in the project really knew how deeply we were going to go creatively with this space until we got there,” Rood says. “But as we were setting things up, we came up with new, imaginative solutions, which was a lot of fun.” This process required many steps, starting with taking the original schematics produced by AudioTek and The Rockwell Group and importing them into Spotlight via DWG files. “We weren’t asked to design the venue itself; another company did that,” Rood says. “We were asked to bring the room to life and integrate all the entertainment technology systems.”

Rood began by extracting vital data from the DWG and then creating geometry in Spotlight to flesh out the designs, as well as adding custom fixtures, which allowed him to experiment with the model and find the best way to seamlessly integrate OMNIA’s lighting, automation, and visual systems. The client, The Hakkasan Group, approved the resulting 3D model, from which the automation data was exported to the club’s multiple grandMA consoles and Ai media servers

“The work for OMNIA’s environment was done in Spotlight, and I imported it into MA 3D to program the movement of the chandelier, the centerpiece of the club,” Rood says. “That way, the clients could choose the positions they liked the best, and we were able to collaborate directly with Willie Williams and Tait Towers, who designed the overall lighting and chandelier itself, and streamline the cues for its different effects.”

Collaborating among Spotlight and other software programs not only allowed Rood to bring the chandelier to life, it also facilitated the fusion of automation controls for all of the club’s connected AV and lighting systems into one master file.

“Using Vectorworks Spotlight to create data sheets with fixture positions, nodes, and IP addresses, which can translate into a wiring diagram, is incredibly valuable,” Rood says. “I use the Extract Face tool time and time again to combine the faces of 3D polygons and optimize the geometry for our process. I also frequently use the Attribute Mapping tool to quickly map textures to objects, and I use duplicate array all day long. With any project I get, my mind focuses on the tools I have available in Spotlight. It’s my software of choice, and I’ve been using it for years.”