We often tout Vectorworks Spotlight as the industry standard for entertainment design, documentation, and production. But what else can the program accomplish? There’s an entire world of event planning that requires an all-in-one solution; a program not only to design, but one to make plans, present them, and have them reviewed, too.

The megachurch — defined as having at least 2,000 people in weekly attendance — are known for putting on huge shows. You’ll see extravagant lighting frame a central stage. You’ll see a passionate and practiced pastor subject to the gaze of thousands. It’ll often look like a concert with its intricate arrays of speakers and lights. Recall Joel Olsteen’s popular television-broadcasted sermons that gather over 7 million weekly viewers. Megachurches certainly have become a spectacle.

So, what goes into producing these large-scale events?

An event from the C3 Church in San Diego. Image courtesy of Reuben Poon.

We had the pleasure of speaking with Reuben Poon, the production manager at C3 Church in San Diego. He’ll be hosting a webinar with us in October to talk about his experience running events. It’s his job to organize the spectacle — from stage design to seating layout, the auditorium is his workspace. And his tool is Vectorworks Spotlight. 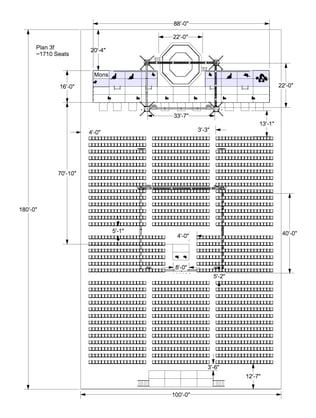 He says he’s not an entertainment designer, rather that his work requires certain design elements — he instead uses Spotlight as an organizational tool to show stakeholders what the church’s show will look like pre-production.

In an introductory email, Poon wrote that before Spotlight, his presentation capabilities consisted of precisely nothing. Outside of hand drawings and Photoshop drafting, Poon said that events would simply be a surprise to stakeholders. “None of these gave us as much flexibility or accurate drawings for stakeholders to make informed decisions. We couldn’t foresee and fix problems beforehand, because we weren’t able to plan things out as accurately.”

He presents his drawings mostly in top views due to their ease of access, because it doesn’t take technical know-how to understand the above drawing. It gives Poon the ability to share production ideas with senior leadership, which he does by publishing PDFs and mockup renderings for feedback. It’s a workflow which rewards simplicity. He presents multiple different ideas, all understood by the intuitive nature of top view PDFs. And while his renderings aren’t all-encompassing, they’re a great presentation tool to consider before investing in the show. 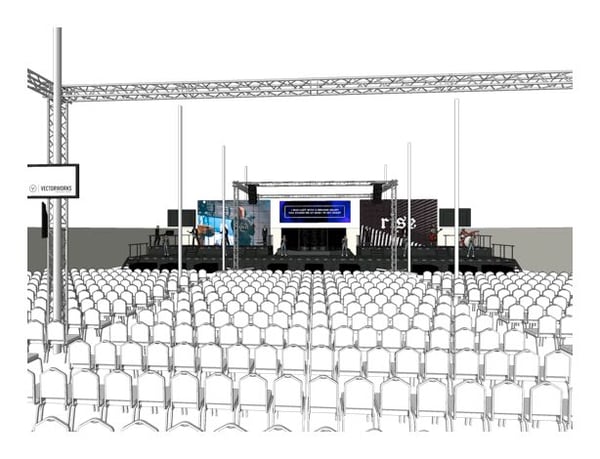 Poon says designing on a budget is challenging. His ideas, in their extravagance, sometimes escape his allowance. It’s part of the reason he started using Spotlight — he wanted an easy way to communicate his idea so he could get accurate cost estimates. He cited Braceworks as a perfect example of how he uses Vectorworks: “While I don’t know the ins-and-outs of Braceworks, I know enough to present a drawing and ask professionals if my idea is even possible.”

In that way, Poon has maximized Spotlight as a presentation and communication tool. As the C3 Church looks to do renovations and expansions, Poon said he’ll use Vectorworks to map out the new buildings. By importing Revit architectural drawings, he’ll be able to present production features like screens and lights laid out across the new buildings. 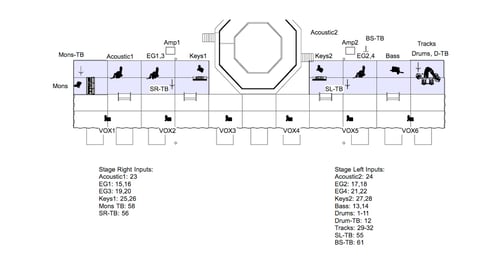 “Before, we never shared anything outside of the tech team. We can now share plans that non-tech people can see and make decisions on,” he said. “Spotlight offers us the ability to do planning and designing for our events in ways that give more accurate representations of what we’re going to do. Before we do it.”

Be sure to register for Poon's webinar! He'll give insight into his unique workflow.