The charismatic temple design featured below is a model of the Santuário Papa João Paulo II, a project by Caique Niemeyer of Caique Niemeyer Arquitetura & Design. Caique Niemeyer is the great-grandson of prominent architect Oscar Niemeyer, a pioneer of modernist architecture known for his designs of the buildings of Brasília, Brazil’s capital city. You may have seen their stunning rendering in our news about Vectorworks 2018. 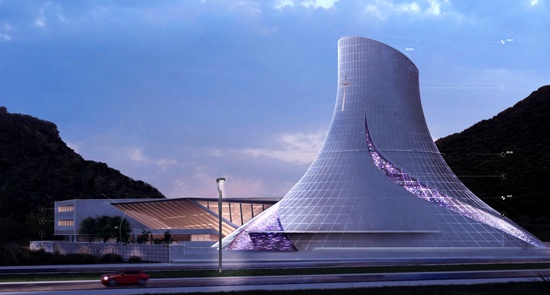 “This project began with a request asking for a religious temple, and our proposal was so well accepted that it became the Shrine of St. John Paul II,” says Caique Niemeyer. “My experience with [my great-grandfather] the architect Oscar Niemeyer in the conception of so many other cathedrals helped me to create this complex.”

This stunning architecture is slated to be built on 12,000 square meters of land in Rio de Janeiro adjacent to Ilha Pura, home to the 2016 Olympic Games Village of Athletes. The 1,961.60-square-meter building will include several visitor-friendly attractions, such as a sanctuary and a museum, as well as an auditorium, shop, cafeteria, and underground parking garage.

Caique Niemeyer and his team are using Vectorworks to create the building’s design and BIM model. “It is critical to emphasize the importance of Vectorworks in the development of this project,” says Caique Niemeyer. “Its practicality and BIM capabilities provided three-dimensional modeling in an easy, fast way, simplifying the preparation of the boards in two dimensions and in coordination with our design partners at Loggia Arquitetura, who are responsible for lighting, engineering, and installations for the project.”

Learn more about how the latest version of our software can enhance your modeling process and streamline your workflows.