Slavin Architects, a nine-person architecture firm in North Fremantle, Western Australia, has a wide portfolio including heritage, civil, commercial, education, and residential design projects. Recently, they were tasked with the Mediterranean Shipping Company heritage project, which involved the renovation of the 100-year-old Wilhelmsen House and the transformation of an adjacent carpark into The Annex, which together create a space to accommodate the company’s new Australia and New Zealand Headquarters.

“The brief was to accommodate the entire staff of the Mediterranean Shipping Company’s (MSC) Fremantle-based headquarters within the heritage-listed Wilhelmsen House,” said Bill Coe, Director of Slavin Architects.

While this was achievable from a space planning perspective, it would have required significant modifications to its historically significant fabric, contrary to sound heritage policy. “To address this, MSC purchased the adjacent vacant carpark for the construction of a contemporary, technologically advanced Annex as a fully integrated extension to Wilhelmsen House,” Coe continued.

While they are two separate buildings, together the Wilhelmsen House and The Annex form a single, united, and co-joined project. The buildings are seamlessly connected internally with the two levels of the older building meeting the four of the annex at a central atrium.

“We did all stages of this project in Vectorworks,” said Murray Slavin, another director at Slavin Architects. “We started off with some sketches on pen and paper, and since Vectorworks is a 3D platform, we were able to quickly move to the computer and start developing very early concepts into the program. Then, we began adding detail to our designs and eventually moved seamlessly from design to documentation. The ability to virtually model the development was instrumental in refining the design.”

Since the Wilhelmsen House was built so many years ago, there were no floor plans, elevations, or drawings available, requiring a full measure-up of the building. “When working on an old building that you don’t have original drawings or their copies, an option is to do a 3D scan,” said Coe. “But we decided not to go down that path because we were confident in our ability to model it in Vectorworks.” 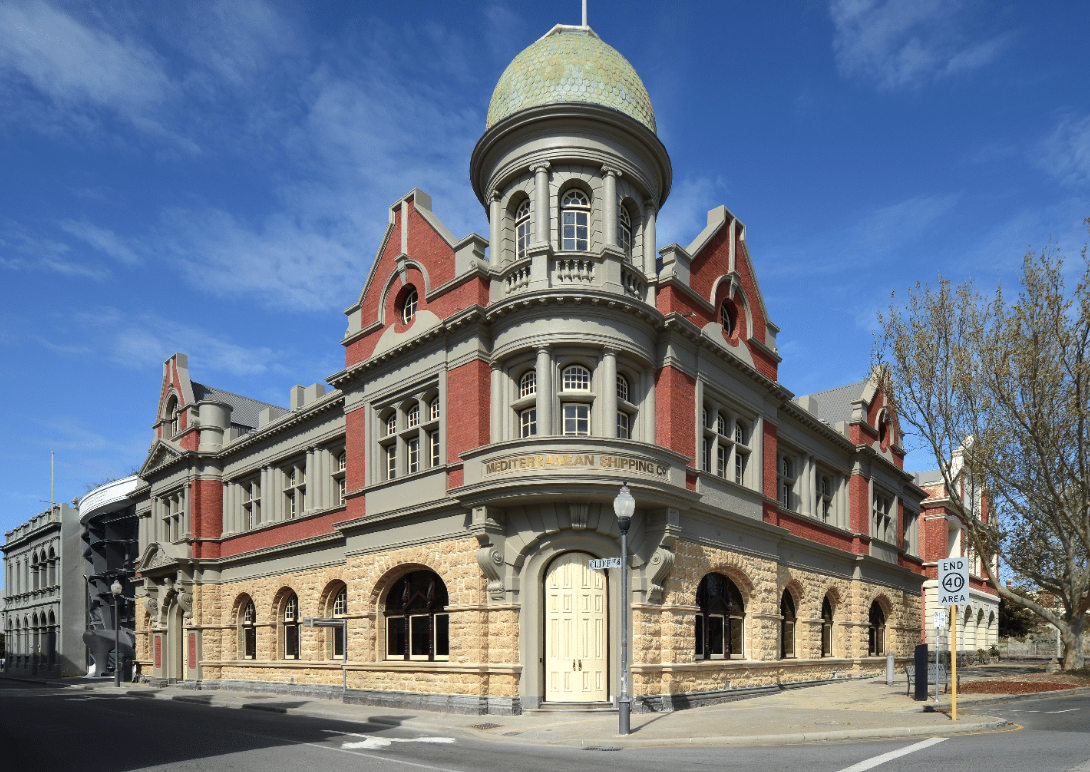 “Although this did mean we had to visit the site on multiple occasions to laser-measure the existing building, every window, every door, every wall, cornice, and skirting was measured and photographed,” continued Coe. “The material was then taken back to the office, and an accurate virtual model was slowly built from scratch. Accuracy was critical given the need to route concealed services through the structure.”

“With all of its ornate architectural features, this took a fair amount of time,” said Coe. “The model we created was detailed enough to serve us through concept design and seamlessly transition to documentation — other practices do their plans, elevations, and sections in one program and then export to another program for their presentation work; the beauty of Vectorworks is all our work remains in one platform.”

The New: From Carpark to The Annex

For the front of The Annex, they decided on a steel-framed, fully glazed façade with protruding, 3D sunscreens. “The façade took cues from the detailing in adjacent heritage buildings with one of the design keys the glorious radial ‘sun bursts’ at the two entrances to Wilhelmsen House,” said Coe. Vectorworks provided the freedom to model what ended up being a very intricate façade with complex geometry.

“It was critical to design the Annex as infill that supports and promotes the heritage values of its surrounding buildings without mimicry,” said Coe. “A transparent box was designed, as it does not detract from, or compete with, our neighbours."

“The façade is the result of Vectorworks’ modelling capacity,” Coe continued. “It allowed us to quickly model our vision and show our client a series of straight perspectives and views. And that was very important in helping to communicate a façade that can not be fully understood in traditional elevation.” 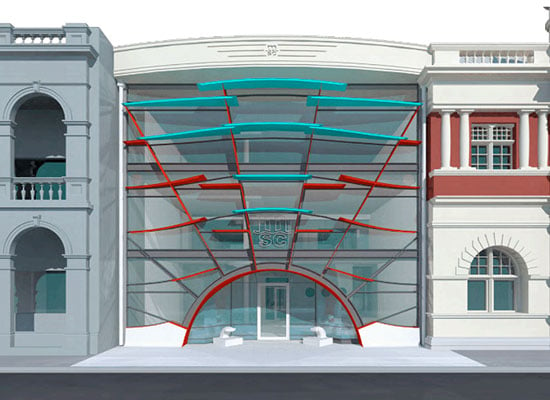 Rendering of The Annex façade

The inside of the building is stark white with rich, red carpet and timber floors. This not only provides a neutral background for an extensive collection of indigenous art, it also ensures high reflectivity which resulted in a reduced level of ambient lighting. This, along with the use of task lighting has helped reduced the power demands on the building

The triple-volume atrium space, which links the two buildings together, acts as a pair of lungs, taking a single breath every 24 hours. It allows the office to breathe by acting as a thermal chimney, expelling the hot air accumulated throughout the day through high level windows, while the night-cycling system then pumps in cooler night air, cooling the considerable thermal mass of the Wilhelmsen House Building overnight. 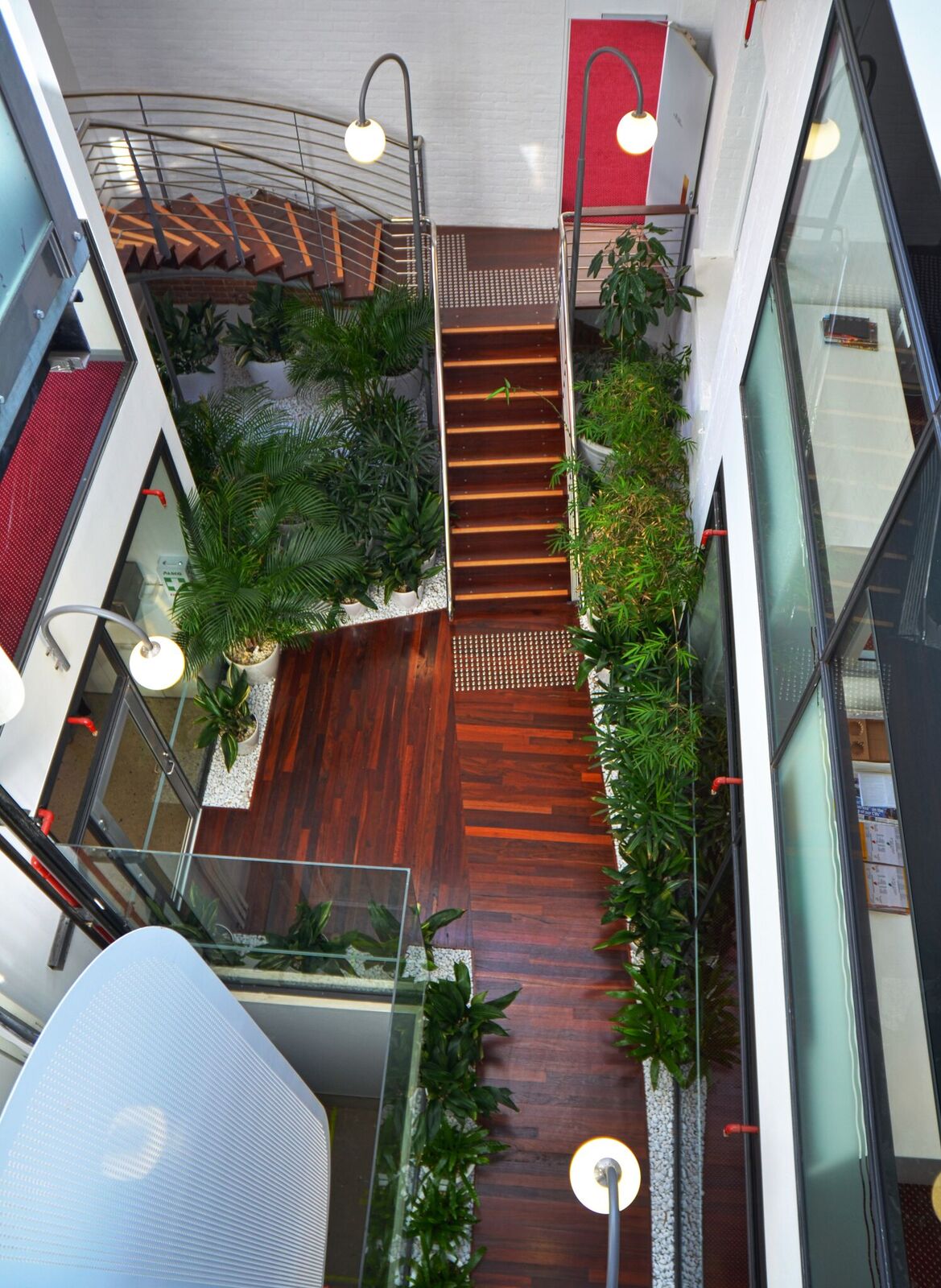 The interior atrium linking the two buildings together

There were a lot of moving parts in this two-building project, so the project sharing capabilities in Vectorworks proved very useful to the Slavin Architects team. “We had half a dozen people working on the design for this project for 18 months,” said Coe. “It was a long design process with another 18 months of construction.” Having the ability to share the designs with anyone at any time helped move it along.

“Overall, we had a seamless workflow within Vectorworks, evolving the model from concept to design through to documentation,” said Murray.