Vectorworks Shines a Spotlight on Churchgoers

At 20 years old, Ohio native Jacob VanVlymen has found himself on the production design team at the largest megachurch in the Las Vegas area. Every Sunday morning, thousands gather at Central Church to attend services with a production quality you would expect when considering its Las Vegas locale.

The spectacular nature of these weekly services is a combination of performances, music, sermons, lighting, and more. For VanVlymen, it’s the intersection of his faith and his passion for production design. 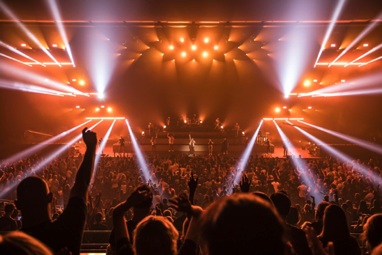 Although a noted self-starter, Jacob wasn’t the first in his family to pursue a career in lighting design. He admits, “design runs in the family,” and he was inspired by his grandfather, whose scenic design portfolio includes high-profile names like ABC Studios and the Metropolitan Opera. Harnessing that familial thread of design savvy, VanVlymen immersed himself into the world of production design.

Studying lighting design at the University of Cincinnati College-Conservatory of Music further supplemented his knowledge of Vectorworks, where he saw the software implemented into his classes. After exploring Vectorworks and continuing to pursue his passion through his education, he took a production design internship at Central Christian Church in Henderson, Nevada. Today, Jacob, alongside lighting designer Jack Dorward and the rest of Central’s Production Team, undertakes lighting design for the church’s weekly Sunday services, with attendee numbers ranging from 20,000-25,000. 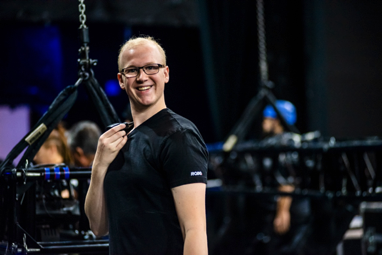 Jacob VanVlymen behind the scenes at a Central Live performance.

Central’s massive weekly turnout and proximity to Las Vegas has led its production design team to place an emphasis on the experiential aspect of its services. Compelling and exciting lighting design is just one facet of a Central Church production, with the end product resulting in an experience rivaling any show that churchgoers might have caught in Vegas the night before.

VanVlymen’s knowledge of Vectorworks has given the production design team the ability to plan out Central’s large-scale events with precision and accuracy. “I can design, I can piece things together, I can understand the room and where we’re going to rig,” he said. “All of that goes through my head because I’ve drafted on Vectorworks.” 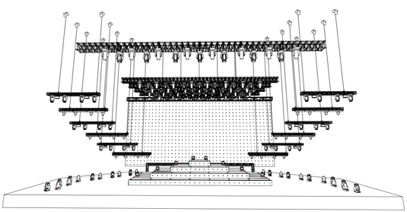 VanVlymen's rendering of Central Live's stage at the Park Theater.

VanVlymen’s faith, passion for design, and tenacity have been key components in launching his career. For those still trying to navigate their way through the production industry, VanVlymen offered these words of advice, “Just keep pushing. I didn’t know what was next, so I kept trying to find a door to go through.”

Want to learn more about Vectorworks for students?