As we work towards a more sustainable architecture, it’s natural to think about specific issues that affect buildings’ energy use, use of other resources like water or building materials, or their impact on the natural environment. Even within just one of these broad categories, there are numerous design concerns. For example, introducing generous and controlled natural daylight has potential energy savings; you might consider maximizing shade to limit direct solar gain in a hot climate; or you could design a building envelope that was highly insulated and airtight.

In reality, though, buildings, especially sustainable ones, are rarely governed by a single design concern. Rather, they’re complex “systems of systems” where various design strategies may be indirectly at odds, and sometimes directly conflicting. How you address abundant direct winter solar gain without creating excessive visual glare, for example, is just one instance where passive heating (energy performance) can collide with occupant comfort.

Take another example: hyper-tight envelope construction clearly has an energy usage benefit, but a sealed environment without adequate ventilation can be a potential for a host of indoor air quality (IAQ) issues, from mold to air pollution due to stored products.

To illustrate, let me share a design problem I faced a few years ago, and how thanks to a few seemingly unconnected Vectorworks tools I was able to resolve it. I had been asked to design a country home on a generous parcel of land for a couple who planned to eventually retire there; part of the brief was a requirement that the house have easy access and no internal steps, so they could gracefully age in place.

With several acres available, it seemed that siting the house would be fairly straightforward; surely, we could find a flat spot to place my clients’ home. As it happened though, the most desirable location given site access and a stand of mature oaks had a bit of slope to it. If we set the main entry of the home near to natural grade, some portion of it would loom out of grade.

Spinning Around the Sun

At the same time, I had to consider another requirement of the brief: that the house be highly energy efficient and have low operating costs. For the site’s hot, humid climate, that strongly suggested a relatively long, narrow building with its broad elevations facing north and south. North light is mostly indirect, so heat gain is simple to control for that elevation. On the south side, a modest roof overhang easily shades from high, summer sun, like the brim of a hat. East and west elevations would be narrow, like a fencer facing an opponent, and present a small target for the brutal summer morning and afternoon sun.

Unfortunately, if the building were oriented exactly as I’ve just described, part of it would jut out of the ground as much as nine feet as the contours marched downhill, an expensive and unattractive proposition. Not only that, but we’d also lose some trees in the process, and that was simply not acceptable.

The Architect, Landmark, and Designer versions of Vectorworks have one of the most robust terrain visualization tools of any BIM software I know. This Site Model tool lets you create a 3D topographical mesh from surveyor contours. More impressively, the digital site can be sculpted with berms, swales, and cuts, all the while retaining the memory of the original site. Better yet, Vectorworks can calculate the volume of cut and fill, so you can quantitatively assess the relative site impact of a variety of design options.

I also knew that while orienting the house exactly to the cardinal directions was ideal, being a little off from optimal azimuth would in theory only have a slight performance penalty. Thanks to another great Vectorworks tool, the Heliodon, I could experiment with any number of alternative orientations and create solar animations to assess the consequences for both photovoltaic (PV) collection and shading windows and doors. After all, a roof that efficiently collects the most sunlight possible also provides the greatest shade.

I set about quantifying the amount of theoretical cut and fill on site for a variety of scenarios. For the first iteration, I optimized the house for best solar collection: long walls facing true north and south, roof pitched to the south by about 15° less than the site’s latitude. As I had initially guessed, the results were not so great for site impact. Using the Site Model’s cut and fill calculations as a metric of site impact, I got a “score” of 340 cubic yards. Moreover, at one end the house would be nine feet out of grade. 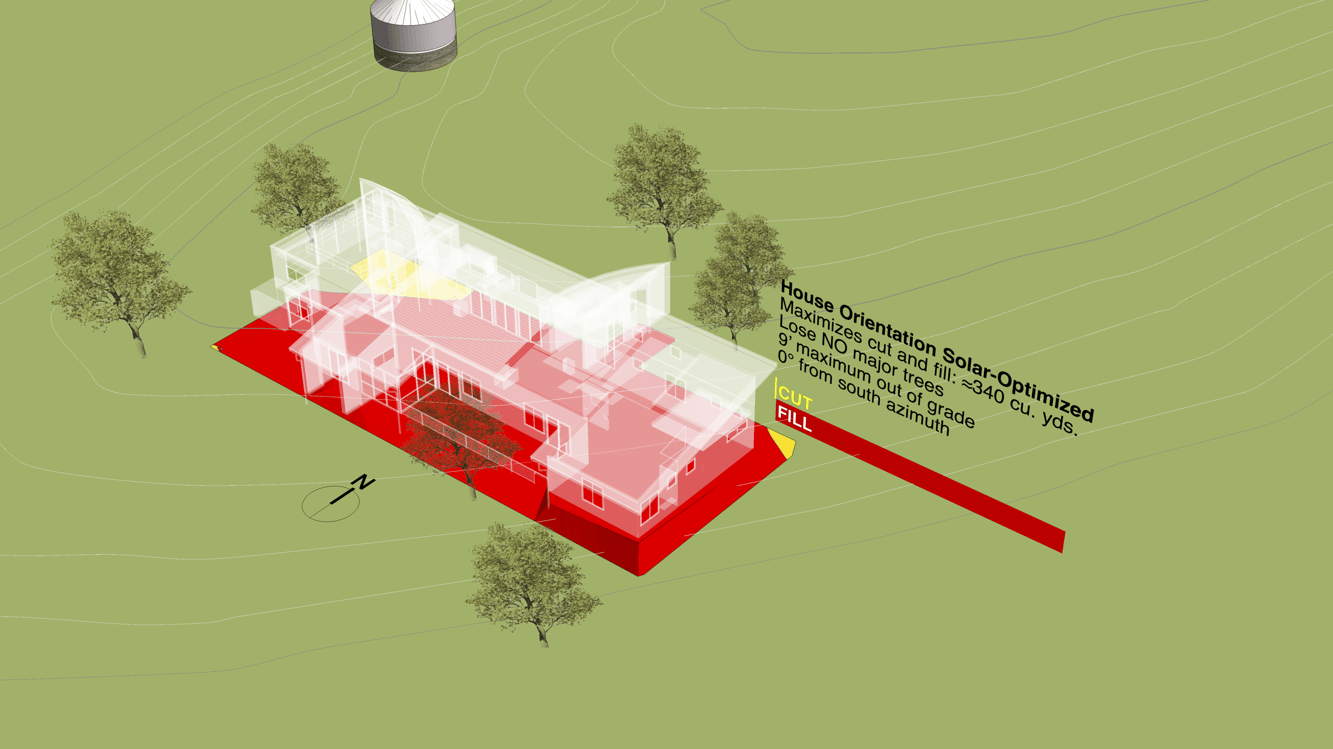 I then took the opposite approach, being as gentle to the terrain as possible and placing the house parallel to the contours. Here, my cut and fill was just over a hundred cubic yards, which was a huge improvement. But the size of the house was such that by minimizing the slope across the building, it had to be placed in such a way that we’d lose three significant trees.

What was more, in this configuration the house would be 50° off optimal azimuth, so PV collection would be quite poor, and shading would suffer. Sure enough, the Heliodon’s solar animations confirmed that turning the house this far to the east would drastically increase early morning heat gain on the southeast side, and afternoon sun on the northwest side. Moreover, when the summer sun is low in the morning or afternoon, almost no amount of roof overhang can provide adequate shade.

I then tried a variety of different orientations between the two extremes of optimizing for minimal contour disturbance and maximum shade, at first in 10° increments. I was able to quickly accomplish each iteration by rotating the Site Model, Heliodon and trees, but leaving the house and its Site Modifiers in place. Recalculating the cut and fill quantities was literally a click of a button, and running a solar animation only took a few minutes. Within an hour or so I had found a happy compromise. 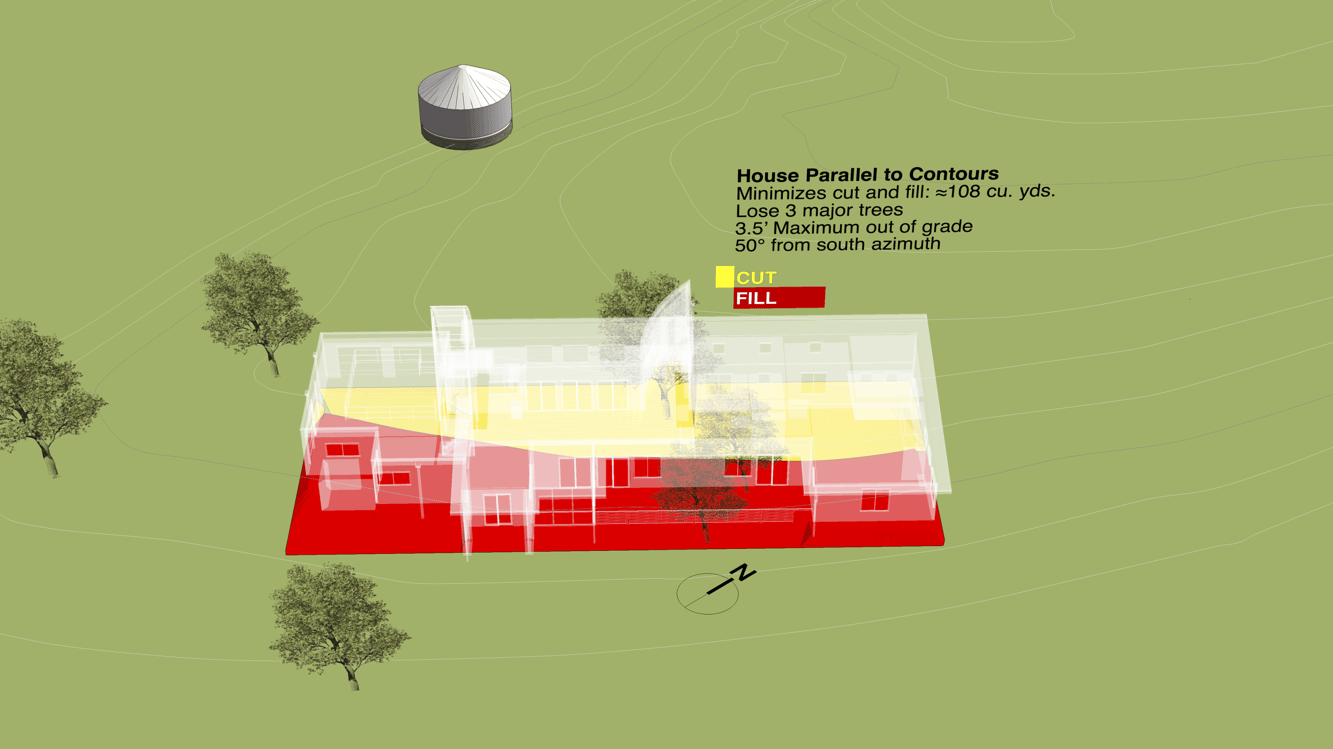 The angle of sunlight impinging on a surface (insolation) graphed against orientation or azimuth is a sinusoidal curve; the peak of the curve is maximum insolation. Notice that within a few degrees of the optimum azimuth the sine curve is quite flat, especially in summer when there is the greatest solar gain. In other words, rotating the orientation ten or fifteen degrees from due south has minimal impact on solar collection (and therefore the general effectiveness of roof shading).

In running through the iterations of various orientations, I noticed that I could place the house at 15° off south, avoid damaging any trees, and find an acceptable level of site impact, as measured by the cut and fill calculation and the maximum height of the finish floor above natural grade. In fact, the desire to mitigate the visual impact of exposed foundation at the southwest corner of the house inspired me to cantilever the slab two feet beyond the foundation.

Vectorworks tools at your disposal like the Site Model and Heliodon can unlock design solutions that might not be obvious. Sometimes you have a hunch, but you may need to quantify it to validate your design intuition, or discover that your assumptions might not be right. 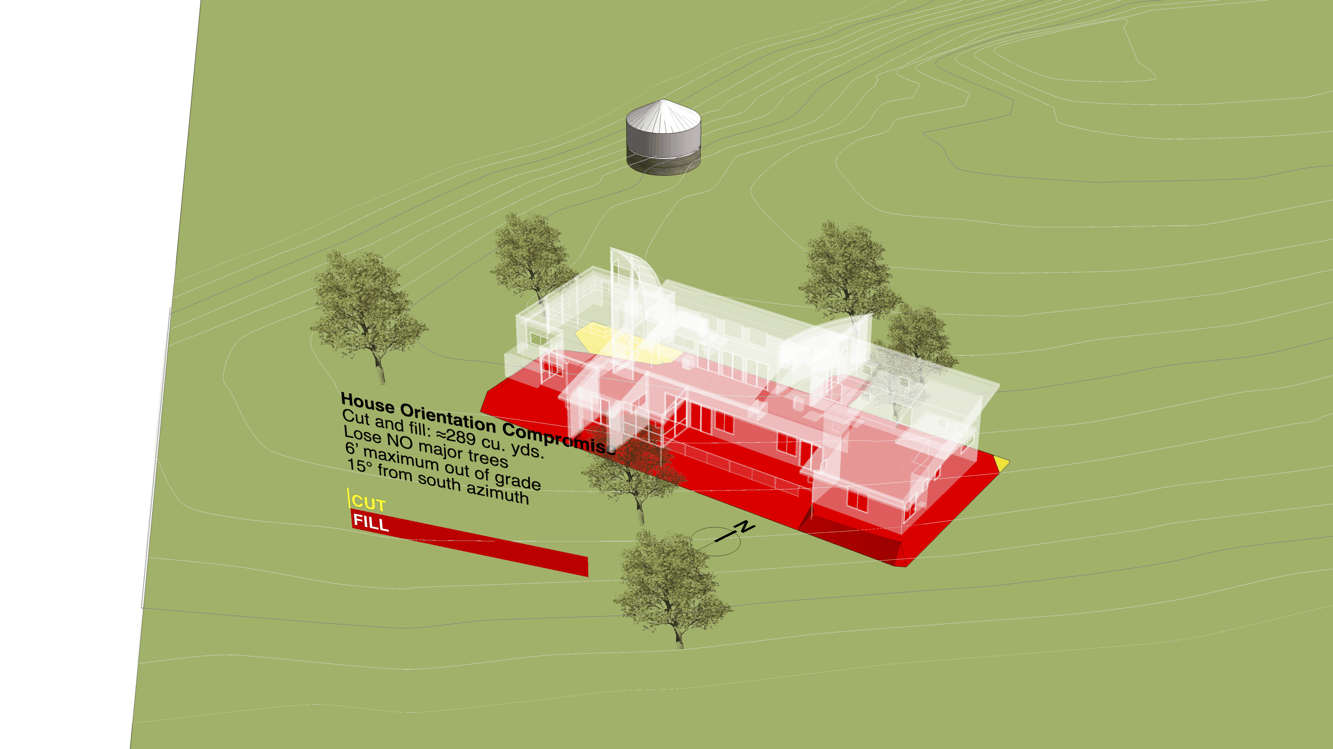 Finally, consider how Vectorworks tools that might seem to stand alone, when used in concert with other tools, can lead you to better design outcomes. 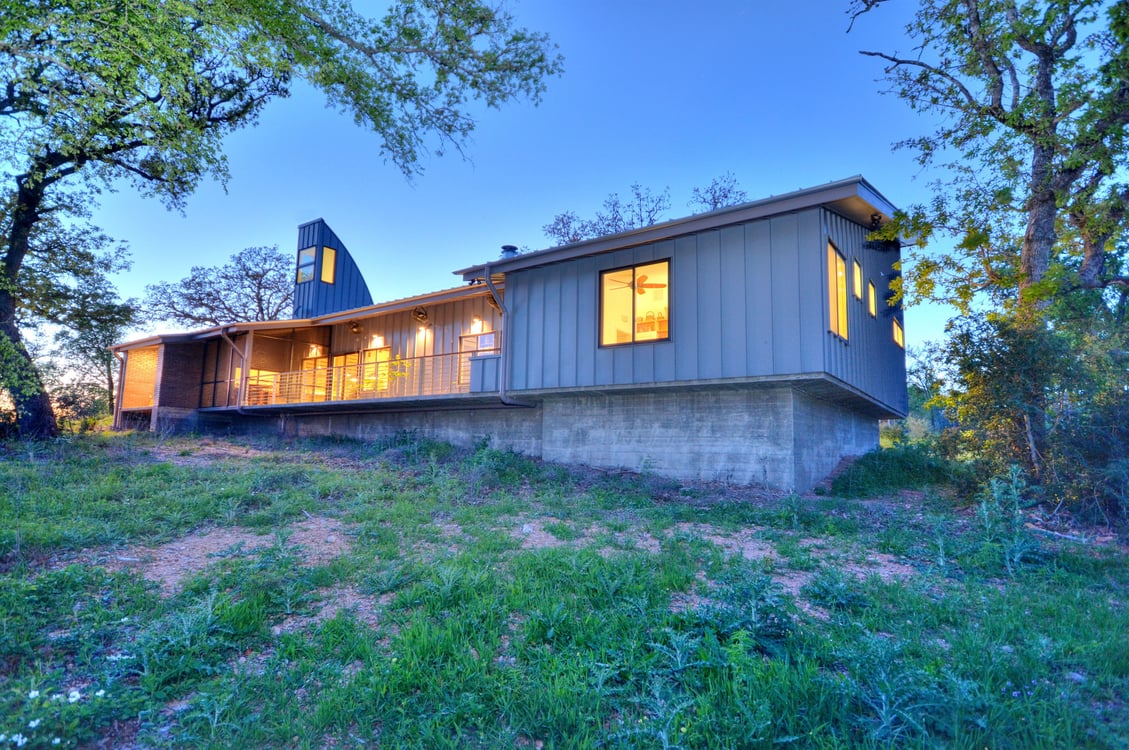