When KISS announced their “End of the Road” tour — the last leg of their 40-year run — fans may have wondered what their stage setup would look like; after all,  KISS is known for somewhat in-your-face show productions (one needs only to recall Gene Simmons’s iconic fire breathing gag). The ongoing tour does not fail to deliver on the awe-inspiring concert experience we’ve come to expect from the rock legends. 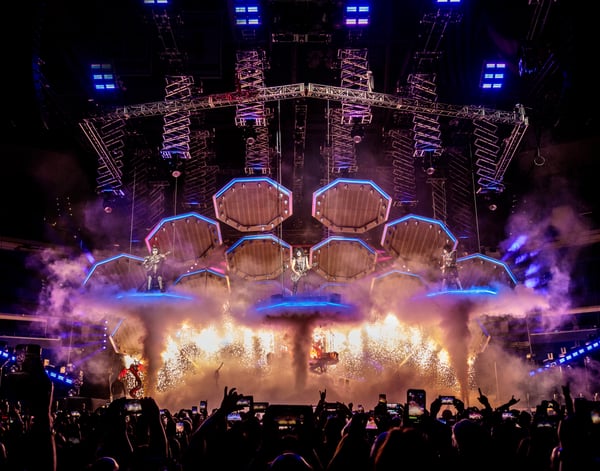 KISS “End of the Road” Tour | Courtesy of SRae Productions and Todd Moffses.

The experience was designed by SRae Productions, which is owned and operated by Sooner Routhier and Robert Long. A quick look through their website and it becomes clear that SRae specializes in high-profile clientele — having worked with artists such as Rihanna and Rage Against the Machine, producing KISS’s sendoff proved the perfect job for SRae.

And it’s not the first time the company worked with KISS. Having worked on the band’s 2013 “Monster” tour, SRae has a video on their YouTube of a 2014 performance in which band members can be seen descending from above the crowd on a spider-like truss contraption while they strum the opening notes of “Psycho Circus.” The production quality mirrors that of the current “End of the Road” tour, with flashing lights, pyrotechnics, smoke effects, and a giant flashing backdrop touting the iconic band’s name.

Before End of the Road’s kickoff, front man Paul Stanley went on the band’s YouTube channel to talk about the stage production. “All I can tell you is this: it’s freakin’ phenomenal,” he explained. “Is it anything like anything we’ve done? No. This is absolutely mind-boggling good. It’s totally KISS.”

The “End of the Road” production design is so outstanding that we’ve chosen it as our 2020 Spotlight featured imagery. Photographed by Steve Jennings, this image can be found right on the 2020 webpage. 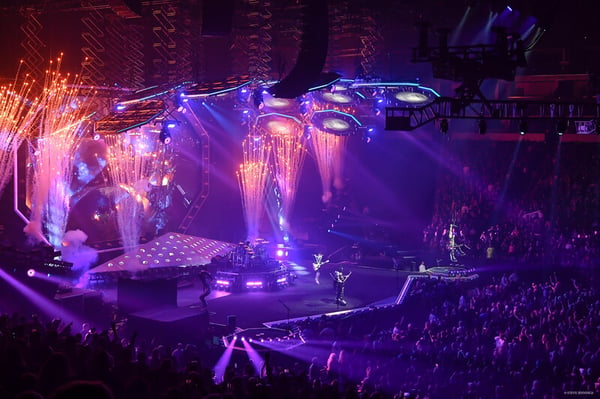 KISS “End of the Road” Tour | Courtesy of SRae Productions and Steve Jennings.

Stunning as it is, the featured image hardly does the entire production justice. With pointed lasers and turbulent lighting, a hanging array of adaptable screens, and a stage perforated by pyrotechnics, the tour’s production is truly a marvel, a fitting “farewell” to a storied artist.

Check out this article from Live Design to see what kind of hardware was used for the production.

See why Vectorworks Spotlight is the industry standard for entertainment design, documentation, previsualization, and production.